Ever think back fondly at those times when as a little girl you flipped through your parents’ wedding album and innocently told your mom how beautiful she looked and how you want to look just like mommy on your own special day? Obviously all our moms looked absolutely stunning on their wedding days. There is no denying or debating that fact because we all look at those pictures with the loving eyes of daughters strolling through memory lane while trying to image what we ourselves might feel when it’s our turn.

Few decades later and it really is your turn to take the plunge and what you might or might not feel on the fateful day is as distant a question as the memory of you as a tiny tot playing dress up with mom’s clothes and makeup. Suddenly you look back at those same pictures and shudder at the pancake faced white washed pictures staring back at you and begin to have nightmares of your own Indian wedding makeup becoming a repeat performance. Worse still, you fear that you might not even look like yourself but like some strange Indian bride character straight out of one of those horrendous Indian soap operas that never end. Adding further fuel to your hellish makeup hallucinations will be encounters with ‘pro makeup artists’ who are either too traditional with their Indian bridal makeup or are completely inexperienced with Indian wedding makeup as they mostly work with western brides.

If you’re wondering how someone can describe the trials and tribulations of getting Indian wedding makeup just as you want and like it while also narrating the horrors of actually going through the process so accurately then it’s because yours truly was an Indian bride not so long ago. My own fondness (read: obsession) with makeup had become an incurable curse when it was time to take the plunge. Having been engaged for a year, I had amassed a rather large collection of bridal magazines, bookmarked a few thousand blog posts, watched countless YouTube makeup gurus and followed way too many Pinterest boards, all in the name of research for the best Indian wedding makeup.

It wasn’t until I had wasted what felt like a million years that the realization dawned on me that most western media catered to brides in white dresses walking down the aisle in rose hued make up looks. Their makeup tended to be understated and elegant to compliment their ivory wedding gowns. Indian brides in stark contrast wear flaming red lehengas or saris, short and fitted choli blouses, sparkling gold or diamond jewellery and headpieces like maang tikkas and large hair pins. The subtle and pretty makeup looks of western brides would just not suffice with the grandeur of Indian bridal finery. 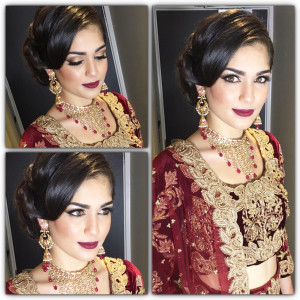 My Indian bridal makeup needed to be statement making and enhance that luscious wedding lehenga hanging in the closet. It also had to compliment the dazzle of the wedding jewellery rather than take away from it. And as if the makeup gods had finally smiled upon me or maybe my over-stimulated and sleep deprived brain just blew a fuse, it came to me as a Eureka moment! All that research would not be for nothing because the key to the best Indian wedding makeup was combining the conventional with the trendy.

A fusion of trends is not an easy path to tread but when done backed-up by your own references of the trends that you love and executed by a skilled and patient makeup artist, it is nothing short of makeup artistry magic. I decided to incorporate everything I cherished from those old photos of my mom like the kohl lined jet black eyes and gold toned eye shadow with the updated and chic twist of punchy lip colours and smokey eyes. I even side stepped the very dated matching your outfit to your Indian wedding makeup bit and picked lip and eye colours that were in the same colour family but various hues of the same colour for an added freshness and fashion forward oomph. In the end I realised that current makeup trends could be beautifully merged with traditional ideas with the right balance of both to ensure your Indian wedding makeup is a reflection of your own personal style and personality.

I hope the following photos will give you some much needed inspiration! 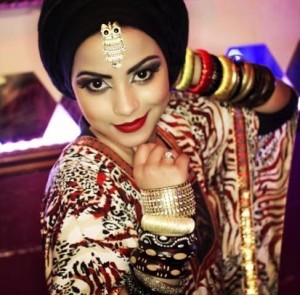 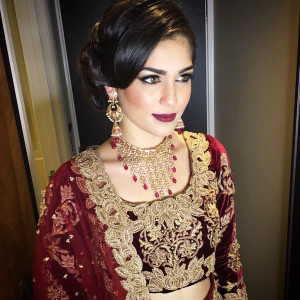